Blog: Not "Any Purpose"

I’ve written another blog post about software licensing, specifically the problems with the FSF’s Freedom Zero:

My previous post on post-open source appeared to resonate with a lot of people, but unsurprisingly, not much has changed since then. Recently, the company Elastic, who makes the database Elasticsearch, changed the license on Elasticsearch from Apache...

I didn’t plan to wind up at quite the conclusion I did, but I do stand by it. Might be of interest to the folks here.

Open source ideology leads to intra-corporate exploitation, the exploitees want to get out from under the exploiters, everyone gets mad that the status quo has been upset, and Amazon forks the last permissively-licensed version of the software and laughs all the way to the bank. The only way for Elastic to win would’ve been to have licensed Elasticsearch under something restrictive like the SSPL from day one.

gif of diCaprio clapping, extra appropriate because he’s a rich douche in the movie

FOSS is not socialist. The free software movement is right-libertarian / “anarcho”-capitalist, and the open source movement is neoliberal; neither of these is even particularly close to socialism.

I’d like for people to at least attempt internal consistency when thinking through what models they’re trying to support.

Yep. This is a thing real humans want and should be able to do.

the libertarian position here is bullshit. A tool is not a morally neutral thing, and toolsmithing is not an act which must by necessity end when the tool leaves the smith’s hands.

This whole paragraph, but punchier if I just focus on these parts.

it conflicts with the ACM Code of Ethics to release software under a license which permits ethical misconduct and economic exploitation.

Wow. Appeal to church of software nerds to drive the point home. Yes!

Thanks for this. Nicely done!

I enjoyed the post, but I found the lyrics at the top a bit jarring.

Maybe they feel more salient if you know the song or the group, so it’s not just a bunch of “fuck” out of context?

I’m not sure I’d attribute quotes to “some jackass”, either. I sometimes feel like that. And I felt it a lot more when I was still reading Twitter.

The ACM ethics point is a really important one.

I’m not sure I’d attribute quotes to “some jackass”, either.

The jackass in question is Drew DeVault, who I’m tired of caring about at this point, hence the anonymization.

The ACM ethics point is a really important one.

Yeah, as I arrived at that conclusion, I started to wonder if it might make sense to suggest including an ethics clause referencing the ACM ethics code to the indiecc license terms.

The jackass in question is Drew DeVault, who I’m tired of caring about at this point, hence the anonymization.

I’m tired of Drew browbeating people, too. But if he were here on the forum, I wouldn’t want anybody calling him a jackass, or him calling anybody else a jackass. I’m nobody’s nanny, and I like me some four letter words, but I’m not putting energy on that.

I started to wonder if it might make sense to suggest including an ethics clause referencing the ACM ethics code to the indiecc license terms.

On one hand, I’m sympathetic. On the other, we can’t put everything in one license. It’s already beginning to feel that way. Indie CC sellers won’t have the problem of not knowing who’s using their stuff at work, infringers aside.

The ml5 approach is the high water mark for recent efforts in the ethical vein, in my view. I think their code of conduct needs work, but the way they couple it to the license is pretty wise.

yeah, the kitchen sink license is a bad outcome.

One of the things that bothers me sometimes is when people try to define what FOSS is as some sort of absolute.

We can discus whether Drew’s approach is a good way to achieve his desired “socialized creation of software wealth”, but if that’s what it means to him, then who am I to argue? The problem is when he declares to be the One True Definition™ that should apply to everyone and everything.

In that sense I also don’t like the “The free software movement is right-libertarian / “anarcho”-capitalist, and the open source movement is neoliberal” comment in your article either. Perhaps this is what FOSS means to some, but it may not be what it means to me.

I don’t think there is a single definition. In fact, I’ve released some of my projects as open source for different reasons than other projects.

Most of my projects don’t have any real reason beyond “I wrote this for myself, but it may be useful for others too so here ya go and have fun with it!” When I started programming on the MSX way way back I did the same – but there was no internet and sharing programs was harder, so I was the only one who would ever use it. You did have magazines that printed “listings” that you could type in, and many of these programs were contributed by amateur enthusiasts for the same reasons one might contribute to the local soccer or scouting club; none of these people had probably heard of Stallman’s “Free Software”, and this was long before the OSI was even a thing.

(Here’s what that looked like by the way; IIRC I had this same book; the numbers on the right are checksums to make it easier to check for typos; I can’t believe I had the patience to actually type all of that in…)

Some other projects I’ve released for some more political reasons; although I wouldn’t really classify them as any of the labels you used.

Of course, if you hold the view that Stallman and the OSI are the only ones with the ability to define these terms however they see fit, then I suppose you could apply these kind of labels. But I don’t think that’s really how it works in reality, and that the community (and therefore, what these terms mean) is much more diverse and nuanced. IMHO it would be more fair and accurate to say that “Stallman’s views are […]” and “Raymond’s views are […]” etc.

This isn’t the most important point your article, but it’s something I’ve been bothered by for a while in all these discussions in the last while.

As for the actual meat of the article; I mostly think all of this is kind of ineffective. Imagine a world where everything would be released under an “ethical license” such that ICE under the Trump admin – the issue that gave steam to the movement – wouldn’t be able to use it. Do you think this would have made a difference? I don’t think it really would have.

This is fundamentally a political problem, and not a technological one. While some technology can perhaps alleviate some political issues, I don’t think this is one of them.

I also have some issues with the ACM code of ethics as well by the way: it’s far too long, contradicts itself, and overreaches quite a bit: “don’t do this” and “don’t do any harm” is quite different from “you should promote […]”. I’m all for pointing out negative effects of actions people take, but I don’t like it when people say “spend your time doing X, otherwise it’s not ethical”, which is pretty much what that ACM code dos (and is, interestingly, quite similar to Drew’s attitude, although Drew is much more … direct … about it).

On reflection, I think the four freedoms are insufficient… my punt is to add this one:

I mocked up this a while back… but it obvs. needs some finessing… there’s a strong argument for shifting GPL’s further to the right… since it’s ‘free software as in free trade’ (neoliberal) but there is also some weight in the observable fact that copyleft is somewhat inconvenient to proprietary companies… even so, copyleft undoubtedly is overpromising to socialist programmers.

The Politics of Programming Color Wheel 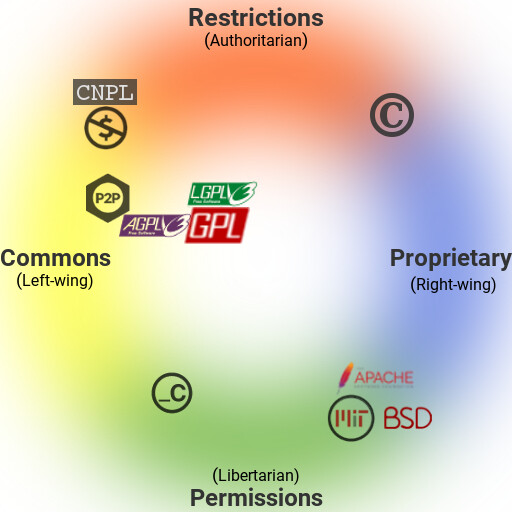 In that sense I also don’t like the “The free software movement is right-libertarian / “anarcho”-capitalist, and the open source movement is neoliberal” comment in your article either. Perhaps this is what FOSS means to some, but it may not be what it means to me.

Yeah we’re stuck at many people telling us what the definitions of things are, which really bugs me.

I commented on a Twitter thread which started by saying that adherence to the OSD was a mandatory starting point: 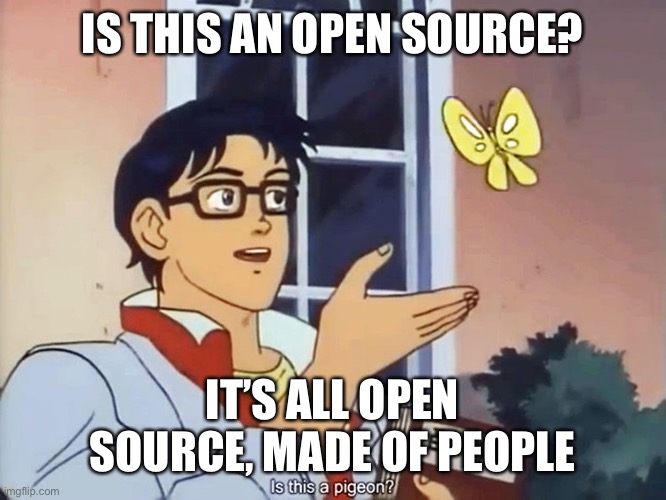 @juliaferraioli @luis_in_brief @sogrady @_msw_ naaah. The OSD is one version of the bible. We can have different editions and interpret it in our own way, and find our own communities of good open source fellowship.

I like @boringcactus’s straight up political labels here — as it forces people to think about if the licenses they choose actually support what they hope to support.

I think the outcome of all this is many people needing to sit down and have a think about the outcomes they personally want and how licenses and general participation in open source aligns with those outcomes or not.

And probably anti-outcomes as well. eg How much “Free riding” am I ok with, by what kind of entities?

yeah, the kitchen sink license is a bad outcome.

I don’t mean to brush off your proposal. Or the idea of ethical licensing more broadly. And I think some of the folks that did push, say, UDHR-based licenses would have been a lot better off drafting off of ACM.

I think the outcome of all this is many people needing to sit down and have a think about the outcomes they personally want and how licenses and general participation in open source aligns with those outcomes or not.

Open Source: What is it good for?