Blog: The Infrastructural Power Beneath the Internet as We Know It

Being a landlord is one of the oldest business models of the commercial internet — but through some bizarre sleight of hand, these companies are generally referred to as cloud or “hosting” services, as though they provide dinner parties instead of leased server space. 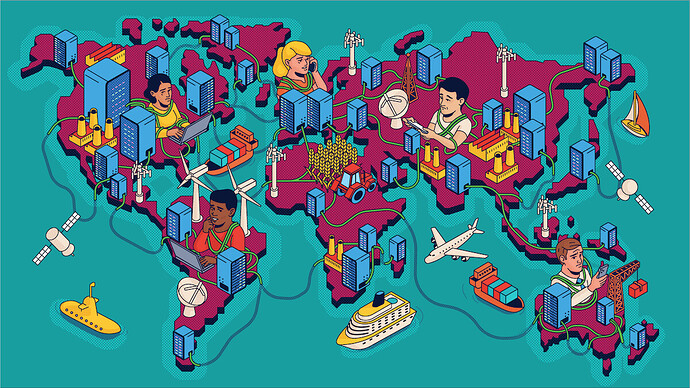 Control over underlying tech infrastructure determines who benefits from it, raising the prospect of alternative ownership and profit models.

…many projects to recreate a distributed internet begin with software. Code is cheap; subsea fiber-optic cable is not. For companies and open-source projects working at the protocol level to shift away from the internet’s hub-and-spoke model, the means of computation tends to be redistributed to users (the basis of most peer-to-peer technologies). But consumer-grade laptops weren’t built to store the volume of data that a planetary-scale network can produce, and not all consumers especially want to invest in loads of external hard drives for all of the stuff that they’ve become accustomed to streaming or just pulling from iCloud.

IMO it’s even worse than that.

If you’re amazon, you don’t want to be “a landlord”, because it’s a commodity business. It’s selling servers others make, to run software others make. Customers can get this stuff from any vendor and your only edge is price/scale. Now at Amazon scale, that edge is significant and destroys the small ISVs, and that is the part we tend to talk about. But in business school it’s a bad business that you want to get out of ASAP.

IMO that risk we never talk about. We talk about Amazon capturing the hosting revenue from e.g. ElasticSearch as if that’s the final boss, but what amazon is actually doing is outsourcing the work of developing a search solution to the community because they can’t do every project at once. The final boss is when Amazon buys or builds a proprietary solution by spending substantially more time/money than the community can.

IMO it’s even worse than that… it’s a commodity business… your only edge is… significant and destroys the small ISVs, and that is the part we tend to talk about. But in business school it’s a bad business that you want to get out of ASAP.

Having monopoly power like that is a significant edge, yes. It is the holy grail of business people.

Is there any better business than monopoly power?

Having proprietary hardware and software, ‘that customers can’t get anywhere else’ does not imply monopoly, but may lead to it if your company is as fierce and unprincipled as (say) Microsoft was with WIndows years ago or AWS or Apple are today.

The proprietary route only implies a temporary advantage until mass consumer incentives change, and they do for all kinds of reasons, cultural shifts, technology advances and so on. Charging for ‘egress’ to ‘proprietary offerings’ is small brain compared to establishing monopoly power. There are ways business can get double free labor, like social media where is gets free content and fictitious commodities like advertising. The article I think was right to create an analogy between tech infrastructure and land because both are constrained by space and time, bandwidth being the exemplary example of the space and time constraints… just like managing a forest.

The risk of propietary control I believe has been done to death by Lessig, Stallman, Moglen, OSI, FSF and many, many more. The reason we talk about Amazon capturing the hosting revenue from e.g. ElasticSearch is because it is all about building monopoly power on the backs of workers. The fact they are doing that with outsourcing and well, FOSS - I think IS a great candidate for being the final boss. My punt is that Amazon will never buy or build a proprietary solution by spending substantially more time/money than the community can because of the obsevation you made right here, and the doing to death of that model by the FOSS folk. Amazon simply doesn’t need to, it has all it needs to continue to create a bigger edge, which in my head is now more like a cliff… what with saas and the control these companies can exert right through the supply chains, from extracting the raw minerals from the ground right up to controlling users with telemetrics and tracking?

The fact they are doing that with outsourcing and well, FOSS - I think IS a great candidate for being the final boss. …from extracting the raw minerals from the ground right up to controlling users with telemetrics and tracking?

This is probably a controversial view in a free-software-ish context but I don’t think the median community project has much value. Obviously great projects exist, but when people imagine the average project they imagine the average one they would use, way above average. Usually when you dig into it there is something unrepeatable that made it possible, often involving some money.

In that case, amazon doesn’t really care about the median project, which has little value. The value is that, in some infinite sea of bad projects, many people will tolerate one of them, and all those people buy servers.

For this reason I think it’s very tough to do anything about it at the individual project level as if this labor is valuable to Amazon. If you can pull it off initially you’ll soon be battling deep pockets and that’s a huge problem. The only strategy I see is to rally the whole community against a common enemy the way the GPL did in years past. For that reason I think the wave of relicensing we’re seeing is useful, even if none of them in particular matter that much.

At the individual project level, you can do fine if you find a niche that’s big enough to matter, but small enough to stay under FAANG radar. Over time though, that window gets smaller. I suspect the ElasticSearch’s of the world are already outside of it, but I guess we’ll find out.

The only strategy I see is to rally the whole community against a common enemy the way the GPL did in years past.

Uh-huh. Yeah. I think that rally will require the support of ‘ordinary’ users too though. Communities of software producers are perversely incentivized and tend to be highly reactionary - esp. when it comes to getting paid. I think the FOSS movement pulled in a lot of influential voices from elite institutions and so it was embraced right at the top and then trickled down to hobbyists, activists and so on.

I think the wave of relicensing we’re seeing is useful, even if none of them in particular matter that much.

Yes. The situation right now is that software producers are operating in that vanishing window you describe. Some folk here I think are working hard to keep that window open and expanding in various ways… advocating clever licensing schemes and posing some leading questions about the current state of the art.

My feeling is that these methods lack a clear methodology and tend to reproduce the hegemonic relationship between capital and the products of applied information science.

I’m working on a few case studies that show how the perception of individual software producers on license choices equivocates on Wertheimer’s Nonworseness Claim (NWC) which can lead to the intuitively challenging politics of right wing libertarianism (e.g. OSI) and the different challenges posed by the social imaginaries of a fairer society based on a more socialized reading of Self-Ownership (FSF) that can even animate far-left, communitarian sentiments of worker-led revolutions.

Feedback on the Public Peace License: a new ethical-source license?