So this turned out to be more of a ride than I anticipated: 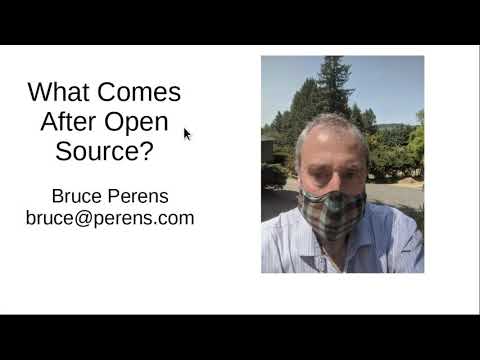 It’s long, though mostly because Bruce takes his time reading through a bunch of slides while hoarse from Cali wildfire smoke.

There are basically two parts to this pitch:

All the same, I can’t help feeling like he’s pitching a lot of the things he tried to rustle up a posse to hang me for doing.

yeah the “post-open source license” felt very reminiscent of your work. there’s no way on earth the OSI in its current hands would approve something like the Hippocratic License, despite the defensible argument that human rights violations are not a “field of endeavor” per se, but Perens seems to be very nervous about this sort of thing anyway.

there’s something deeply amusing about “we must preserve Open Source, but also, it’s deeply broken and has been for decades, because it sells out everyone to businesses.” it’s almost like selling out to businesses was the entire point of rebranding “free software” as “open source” or something. (it’s also very funny that he raises the question “should we be ethical” just to answer “no” - that seems like an unforced error.)

“we must preserve Open Source, but also, it’s deeply broken and has been for decades, because it sells out everyone to businesses.”

I hadn’t really thought about it in these terms. But I think they’re really helpful.

For someone like Bruce, and for someone like me, in my law practice, the temptation is not to bite the hand (brand) that feeds. Even if open source “failed” in the sense of not meeting original social goals, it “succeeded” in meeting a goal that’s far more popular: creating opportunity, making money, and so on. “We set out to achieve justice, but we accidentally got famous and made money instead.”

I can say “there’s no such thing as an ‘open source lawyer’”. And I do. And oddly, I guess that helps me a lot of the time, when people end up reaching out to me because “open source lawyer” is exactly what they asked for. I think I’m honest, insofar as I’m not comfortable with that. But I’m sure I could be doing more to push that message out ahead of me.