The failure of free licenses and their derivatives

It wasn’t always the case, but nowadays I believe that our urge to freely share, reflected (also) in the existence of free licenses (and consequently in dual licenses as well), is misguided.

I believe that giving stuff away for free is an aberration; it is a throwback behavior that evolved in times when “free” sharing was accompanied by a different behavior, one that made everybody to share equally. Anthropologists claim that our hunter-gatherer ancestors lived in egalitarian groups where all resources were shared equally. The system was supposedly maintained by “intentional leveling” - a process the group members imposed on individuals who defected from the rule. The original leveling behavior works in small groups, but is unenforceable when the group member numbers exceed something like the Dumbar number. Apparently, in the last 15 to 30 000 years, humans started living in large aggregations and the original leveling mechanism lost its power. Now we are stuck with half of something that used to be beneficial for us. The behavior now works against our individual and collective economic interests.

I believe we must develop a modern version of the leveling mechanism, that will force everybody to reciprocate. We need to reject any forms of free sharing, if such sharing is not done by everybody.

I believe this should be reflected also in the licenses governing use of open source software.

I would go further, I would suggest that the incentives to deliver large scale shareholder dividends routinely pirates the value created by workers towards private interests that result in massive economic failures.

To fix this, we just need to ensure our work is licensed to explicitly prohibit use by large companies.

The Dunbar number is a bit of a problematic idea, (there are a number of good academic sources that contextualize the problem). IMO, it is better to use a number that is compatible with existing industrial data collection practices and industrial classifications since these numbers are already widely reported in public accounting standards and often mandatory in most countries. This leads to a straightforward method of license monitoring and enforcement.

To fix this, we just need to ensure our work is licensed to explicitly prohibit use by large companies.

Well, this is actually something I see as a problem - definition of “large”.

Couldn’t a system (+ license) be designed where the cost rises organically with company “size”? Couldn’t the cost be a function of (say) the number of end users of the product? I imagine the single user cost could be determined by the author of the artifact, but other options exist.

Re. the Dunbar number - I meant it in relationship to the critical group size, at which the “intentional leveling” mechanism breaks down.

I would like to clarify one point that I suspect readers of my initial post might find problematic. If a license required reciprocity in national currency, then most inhabitants of this planet would be excluded from consumption - by the virtue of scarcity (and other attributes) of money. That of course would be a show stopper. What I had in mind is - let people pay with their own labor, invested into projects they freely choose. Regardless of immediate usefulness of such work. That resource is readily available to all, meaning almost nobody is excluded from earning a “proof of labor” currency that could be used to reward others. It is also an inherently valuable resource, because given the choice, normal people will prefer to do useful work instead of choosing random activity, usefulness of which they do not believe themselves.

I believe we must develop a modern version of the leveling mechanism, that will force everybody to reciprocate. We need to reject any forms of free sharing, if such sharing is not done by everybody.

And that is why I believe reciprocal licenses are the future of FOSS.
Traditional FOSS is just a scam to get programmers to subsidize companies.
Reciprocal licenses close that loophole, because you cannot use the software to build something which doesn’t abide by the same rules.
If you extend reciprocation to also allow paying $$$ instead of just contributing code, then you give a way out for people who want to write closed-source code, while still contributing back to the commons.

If you extend reciprocation to also allow paying $$$ instead of just contributing code, then you give a way out for people who want to write closed-source code, while still contributing back to the commons.

Let’s go even further - as I suggest above - let people pay with their time doing any* voluntarily chosen activity in addition to $$$. See for example how you can remove the ad block on this site.

Well, this is actually something I see as a problem - definition of “large”.

A business is defined as large under the statutes of the state. The criteria are normally used to identify the appropriate accounting standards and for international data collection initiatives. They do vary from country to country but you can easily tidy it up with measures of profitability, turnover, assets on the balance sheet or number of employees, which is (generally) 250 employees.

It really is that easy. For the purposes of monitoring the level of unevenness in the work relation between worker and capital, my research has shown that the companies that have the most employees (more than 500) have far more negative impact (I call it the ‘exploitation factor’) in terms of distributing output from employees than others… no matter what the other metrics might be. 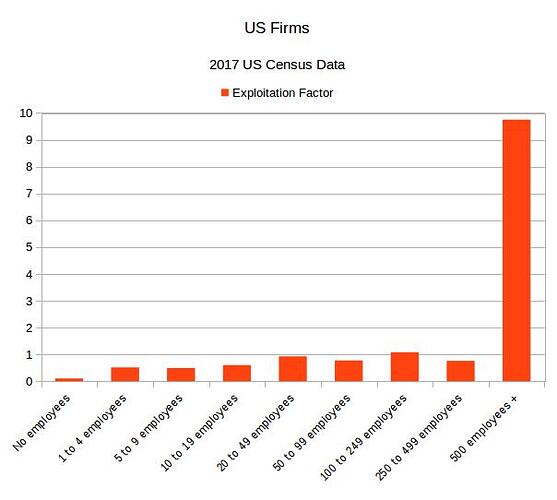